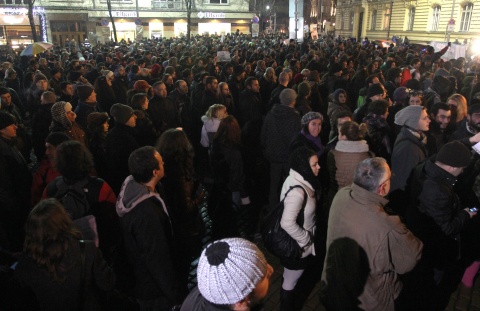 About 1000 protested before the Bulgarian Parliament on Monday, Jan 14, 2013, in protection of the Irakli Beach. Photo by BGNES

This has become clear from an expert position of the Environment Ministry sent to news site Mediapool.

In the wording, of the ministry experts Irakli – Emona will not be granted the status of "protected territory" since that would be "unfeasible" and "useless".

"Given the fact that the draft for the Irakli protected area is already part of two protected zones under the Natural Habitats Directive and the Birds Directive, we deem that the same will guarantee to a sufficient degree the protection of natural habitats and species which makes it useless to grant status to it under the Protected Territories Act," states the Bulgarian Environment Ministry.

Nikolay Nedyalkov, head of the NATURA 2000 Directorate at the Environment Ministry is quoted as explaining that the plot where Emona 2000 EOOD, a developer, is now building a complex of detached houses is not part of the Irakli zones that are banned for construction, which are definied by an order of Environment Minister Nona Karadzhova in 2009 under the Biodiversity Act.

Mediapool reminds that back in 2006 when a procedure is start to grant a protected territory status for Irakli, and then Environment Minister Dzhevdet Chakarov issues a moratorium on construction there, the developer, Emona 2000, appeals the decision. The appeal of Emona 2000 manager Dobrin Ivanov was rejected by the Supreme Administrative Court in 2007 because of the procedure that has been started under the Protected Territories Act.