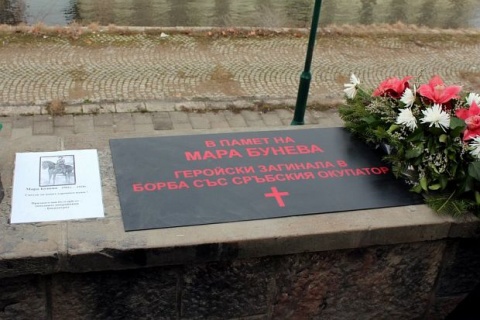 Since the beginning of the 2000s, almost every year Macedonian-Bulgarians have mounted in Skopje a new commemorative plaque of Mara Buneva after being destroyed by local ultra-nationalists. Photo by DarikNews

Hundreds of Bulgarians have gathered once again in Macedonian capital Skopje to honor the memory of Bulgarian revolutionary Mara Buneva.

The marking of the 85-th anniversary of Buneva's death has been held without incidents and clashes unlike previous years.

Bulgarian groups, marching in Skopje to the place where she was killed were accompanied by police cordons as souring relations between the two Balkan neighbors have preoccupied many on both sides of the border.

Mara Buneva was a Bulgarian revolutionary, member of the then Internal Macedonian Revolutionary Organization, VMRO. She is is celebrated in Bulgaria and by VMRO for the assassination of Serbian official Velimir Prelic. In the Republic of Macedonia many regard her as a Bulgarophile traitor.

On January 13, 1928, Buneva intercepted Prelic on his way to lunch, shot him and after seeing him die committed suicide. Her act was part of a violent resistance movement against Serbian policies of forced assimilation of the Macedonian Bulgarians. Prelic had been known for ordering arrests and tortures of young locals, members of Macedonian Youth Secret Revolutionary Organization (MYSRO), who openly opposed the Serbian rule.

In 1941, the Vardar Macedonia was annexed to Bulgaria and a commemorative plaque was mounted on the place of Buneva's death. In 1944, the plaque was obliterated from the new Yugoslav authorities, led by the Macedonian Communist Party.

After the fall of Communism, especially since the beginning of the 2000s, almost every year Macedonian Bulgarians mount on the same place in Skopje a new commemoration plaque. The memorial survives for just a few days, before being destroyed by local ultra-nationalists.

On January 13, 2007, a group of 40 Bulgarians and Macedonian-Bulgarians, some of whom elderly, commemorating Buneva, were attacked in Skopje. The attackers were yelling "Die Bulgarians," and "Go away." They used rocks and metal pipes, seriously injuring many of those gathered at the memorial. Later the same night Buneva's monument was desecrated and all the flowers and wreaths burned to ashes. The incident stirred at the time a serious diplomatic brawl between Bulgaria and Macedonia.

In the eve of the commemoration in 2008, Skopje woke up with graffiti saying "Death to Bulgarians and January 13 Traitors." They were written on a building's wall, located in the vicinity of the Bulgarian Culture and Information Center in the city.

The Bulgarian Frog News agency reports the plaque that was mounted just one day ago, during the commemoration ceremony, has been already destroyed overnight.