People in 3 Cities to Rally for Preserving Bulgarian Beach 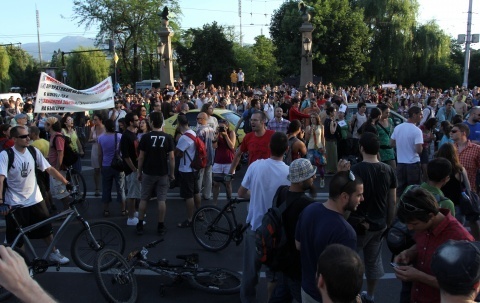 A protest rally, titled "Hands off Irakli," is taking place Monday in the capital Sofia and in the second and third largest Bulgarian cities of Plovdiv and Varna.

The rallies start at 5:30 pm and are organized through the social network Facebook. Over 3 000 have already joined online and the number keeps growing.

In Sofia, the demonstrators are gathering at the monument of Patriarch Evtimiy at the intersection known as Popa (the Priest). The procession starts at 6 pm in the direction of the Parliament, where the protest meeting is scheduled for 6 pm.

The organizers stress the rally is legal since a permit has been officially requested.

In Plovdiv, the gathering point is the central Saednenie (Unification) square, while the one in Varna is in front of the building of the "Stoyan Bachvarov" theater.

The outrage was triggered by information that a company, Emona 2000, was pouring concrete to build a vacation village on what is one of the last remaining non-urbanized beaches in Bulgaria – Irakli.

The demonstrators demand to declare Irakli and two other beaches so far without construction - Kara Dere and Kamchiyski Pyasatsi – protected areas and to issue orders for including them in Natura 2000.

Meanwhile, the Bulgarian Ministry of Environment and Waters continues to reiterate that the grounds of the protest are subjective and lack constructiveness.

An official statement, sent to the media by the Ministry's press office, stresses that the terrain where the construction of the vacation village is taking place has been legally urbanized and by the time the investment proposal has been received there have been old vacation buildings on it.

The statement is citing a probe assigned by Environmental Minister, Nona Karadzhova, upon receiving information about construction activities in Irakli. It underscores that "the procedure has been conducted in full adherence to the eco legislation and in full transparency.

The rallies come on the heels of what is now known as the "Dunes Gate" scandal.

One week ago, the Minister of Regional Development and Public Works, Lilyana Pavlova, pledged that legal amendments will be tabled ASAP to lead to a full ban on construction activities in Bulgaria on plots listed as sand dunes.

In the summer of 2012, mass civic protests led to Bulgarian President Plevneliev's veto on the Forestry Act.

The people who gathered in downtown Sofia to protest the controversial Forestry Act in June were collectively named the country's Human of the Year by the Bulgarian Helsinki Committee for managing to mobilize themselves against a government that was abusing its power in favor of private interests, thus violating the core principles of representative democracy.

The rallies carried out at Eagles Bridge (Orlov Most) in the Bulgarian capital gathered thousands of people.