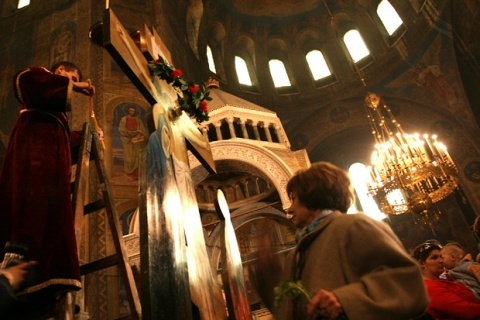 A prayer for prosperity is held Saturday in Bulgaria's Danube town of Belene. File photo

A prayer for prosperity and for the success of the forthcoming national referendum on the future of nuclear energy in Bulgaria will be served in the Danube town of Belene Saturday.

The Veliko Tarnovo Bishop, Grigoriy, will lead the prayer. The mass is organized jointly by the Town Hall and the local temple.

The service will be followed by a meeting and a concert at the central square dedicated to the referendum's success.

The Mayor of Belene, Petar Dulev, says the majority of locals hope the referendum's outcome will lead to the revival of the project to build a second Nuclear Power Plant in their town.

According to the Mayor, the NPP is a "strategic and infrastructure facility, with a construction permit from the European Union, and is vital for the advancement not only of Belene, but the Pleven Region, northern Bulgaria, and the entire country.

In April 2012, Belene residents rallied against the halting of the NPP project on grounds it would provide new job openings for the region and would boast its economic development.