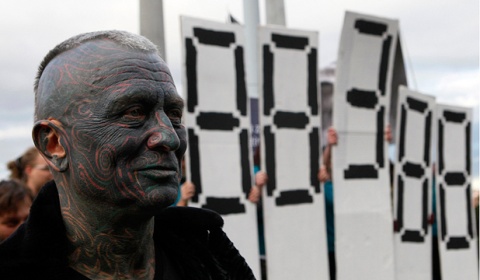 Tattooed from head to toe, Vladimir Franz, an opera composer, drama professor and painter is running in a surprising third place in the Czech presidential race. Photo by stuff.co.nz

Czechs voters are electing a new president of the country over the weekend.

The Czech president post is largely ceremonial, but also the head of state also has the authority to make key appointments such as at the constitutional court and the central bank. The new president will succeed Vaclav Klaus, a conservative Eurosceptic who has led the country for the past 10 years.

Voters have nine candidates from whom to choose. Opinion polls suggest that there is no clear front runner, BBC informs Saturday.

If no candidate wins 50% of the vote, there will be a runoff.

The BBC's reporter in Prague has said that the debate between the candidates on the eve of the vote was lackluster, and did little to narrow the field.

For the first time, the Czech president will be elected in a popular vote – a new system that makes it possible for independent candidates to run for the post.

Unlike Klaus, who has attacked the European Union at every opportunity, the favorites, Milos Zeman and Jan Fischer, have a more moderate approach to the EU, which the country joined in 2004.

The left-of-center Zeman, who was prime minister from 1998 to 2002, leads the polls with about 25% support. He is, however, hunted by his past membership in the Communist Party. Fischer, a centrist and a former state bureaucrat, gained significant popularity when he led a caretaker government in 2009-2010. He is polling at about 20%.

According to BBC, the elderly Foreign Minister, Karel Schwarzenberg, is a favorite among the young urban voters.

Another top contender is the flamboyant Vladimir Franz, an opera composer, drama professor and painter, who is tattooed from head to toe, his face a warrior-like mix of blue, green and red. He is running in a surprising third place.

According to the Czech constitution, Klaus cannot seek a third term in office.

BBC correspondents say his departure is likely to be welcomed in many European capitals, which were often exasperated by his blunt suspicion of European integration.

However, many in the Czech Republic gave him credit for his economic policies when in government in the 1990s, and for his decision to keep out of the euro.

Klaus's predecessor as president was the playwright and dissident Vaclav Havel, the leader of the Velvet Revolution that brought down Communist rule in 1989. Havel passed away in December 2011.