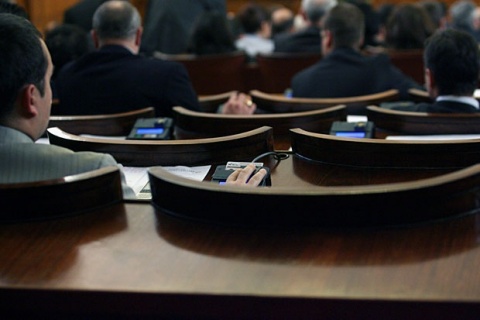 Bulgarian MPs upheld the veto of President Rosen Plevneliev on texts of the Investment Encouragement Act without debates. File photo

The third veto of Plevneliev, since he took office, relates to changes to the Foreigners in the Republic of Bulgaria Act and the Bulgarian Citizenship Act, postulating that a foreigner can receive Bulgarian citizenship if he or she have a permanent residency status for over a year and have invested over BGN 1 M in a Bulgarian company.

BGN 4 M and the creation of 50 job openings were required for granting permanent residency.

Only 3 Members of the Parliament supported the Act as it is, 26 voted in support of the veto and 95 abstained. In order for the veto to be rejected 121 MPs must vote against it.

The move was expected since the Economy Committee unanimously upheld the veto earlier and Plevneliev's motives for it.

The veto was approved early Friday morning without debates.

The President noted in his motives for the veto that the requirements for granting permanent residency status were unfoundedly high and complicated, along with the conditions to grant Bulgarian citizenship binding them with substantial investment amounts.

The President also disapproved of texts related to investments and intellectual property.

According to him, the new conditions and requirements pose additional obstacles to foreign investors.

It emerged during the week that the ruling Citizens for European Development of Bulgaria party, GERB, is considering lowering the investment amount thresholds for foreigners to be granted permanent residency status and Bulgarian citizenship.

Economy and Energy Minister, Delyan Dobrev, called on MPs from the Economy Committee to lower the amounts, while Finance Minister, Simeon Djankov, proposed to settle them at BGN 500 000 for granting permanent residency for five years, and after that providing opportunities for those foreigners to apply for Bulgarian citizenship.