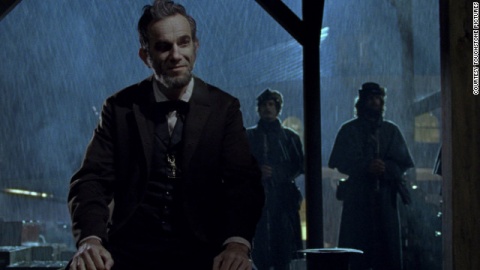 - "Lincoln," director Steven Spielberg's film about the 16th president and his battle to end slavery, topped the nominations for the 85th Academy Awards on Thursday, receiving 12 nods, including best picture. Photo by CNN

"Lincoln," director Steven Spielberg's film about the 16th president and his battle to end slavery, topped the nominations for the 85th Academy Awards on Thursday, receiving 12 nods, including best picture, CNN reported.

As always, there were a handful of surprises. The most notable, perhaps, was the showing by the small independent film "Beasts of the Southern Wild." Its 9-year-old star, Quvenzhane Wallis, earned a nomination for best actress, becoming the youngest person ever in that category. In addition, the film was nominated for best picture, best director (Benh Zeitlin) and best adapted screenplay -- four nominations in all.

Michael Haneke's film "Amour," about a husband and wife coping with the effects of a stroke and aging, also did strongly, receiving best picture, best director, best actress and best original screenplay nominations.

On the other hand, some expected nominations failed to pass. Neither Quentin Tarantino nor Kathryn Bigelow received best director nominations, though their films -- "Django Unchained" and "Zero Dark Thirty," respectively -- received best picture nominations. The snub of Bigelow, who won an Oscar for "The Hurt Locker," was particularly surprising, as she and her film have dominated critics' lists during awards season.

Tom Hooper, the director of the expansive musical "Les Miserables," also failed to be nominated, though his film received eight nods overall.