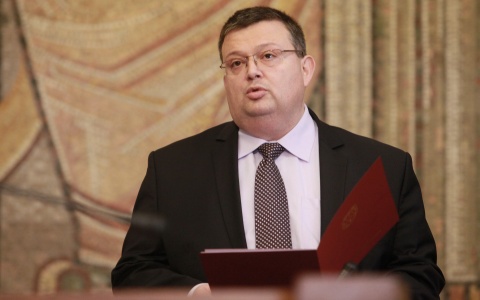 Sotir Tsatsarov, former Chairman of the Plovdiv Regional Court is now Bulgaria's Chief Prosecutor, amidst rumors to be the favorite of the ruling GERB. Photo by BGNES

Sotir Tsatsarov has taken the oath of office and has been sworn in as Bulgaria's new Chief Prosecutor.

The Thursday ceremony in the main hall of the central court in Sofia was attended by Justice Minister, Diana Kovacheva, Tsatsarov's predecessor, Boris Velchev, who is now a constitutional judge, the Chairman of the Supreme Court of Cassations, Lazar Gruev, the members of the Supreme Judicial Council, VSS, and senior prosecutors.

"I wish him fewer scandals in the 7-year term and to be successful in explaining to the public what is the exact job of the Chief Prosecutor in Bulgaria," Velchev said.

Hours ahead of the ceremony, VSS released Tsatsarov from the post of Chairman of the Plovdiv District Court. His Deputy there, Magdalina Ivanova, is the interim Chair of the Plovdiv Court.

Tsatsarov won the position at the first round, with 18 votes "for", 3 "against" and 3 abstentions. He is believed to be close to Interior Minister Tsvetan Tsvetanov and Prime Minister Boyko Borisov.

It was further reported by the Bulgarian Trud (Labor) daily that Tsatsarov has invited for his deputies his former rivals for the post – Deputy Chief Prosecutor, Galina Toneva and the Head of the Specialized Appellate Prosecutor's Office, Borislav Sarafov.