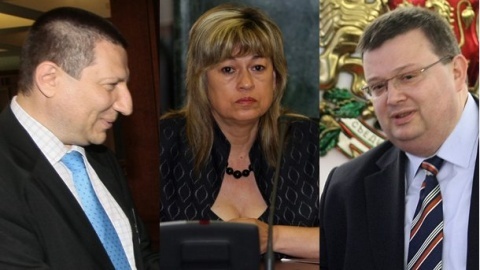 Bulgaria's newly-elected Chief Prosecutor, Sotir Tsatsarov, has invited for his deputies his former rivals for the post – Galina Toneva and Borislav Sarafov.

Tsatsarov is taking the oath of office Thursday. Toneva and Sarafov have accepted the offer, Trud further writes.

Approached by Trud, Sarafov, Head of the Specialized Appellate Prosecutor's Office, has said that he could not confirm the offer to become Tsatsarov's Deputy, but has stressed if there would be such offer, he would accept it and would consider it a sign of high marks and trust.

The Chief Prosecutor deputies are voted by the Supreme Judicial Council.

Tsatsarov inherited from former Chief Prosecutor, Boris Velchev, now constitutional judge, three deputies – Toneva, Naydenov, and Valeri Parvanov. Naydenov has secured the deputy post since he was elected by VSS for a second 5-year term as Chief of the Investigative Services.

Toneva declared earlier, she would resign to give the new Chief Prosecutor the opportunity to appoint his own team.

Seemingly, Parvanov would be out as deputy. The other surprise is Sofia City Prosecutor, Nikolay Kokinov, who was considered a very strong contender, not making the cut. Plovdiv Appellate Prosecutor, Ivan Daskalov, was also mentioned as a likely candidate to become Tsatsarov's Deputy.

All appellate prosecutors have been invited to attend the ceremony in the main hall of the central court in Sofia. The ceremony is also going to be attended by Justice Minister, Diana Kovacheva, the VSS members, and Tsatsarov's predecessor, Boris Velchev.

Tsatsarov is to be sworn for a seven-year term.

Tsatsarov, up to now head of the Plovdiv District Court, won the position at the first round, with 18 votes "for", 3 "against" and 3 abstentions. He is believed to be close to Interior Minister Tsvetan Tsvetanov and Prime Minister Boyko Borisov.