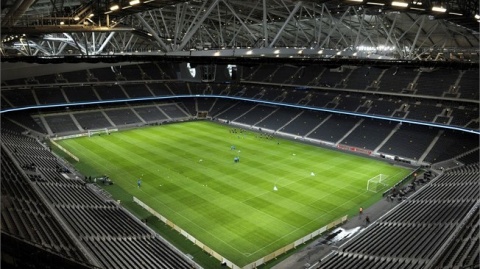 FIFA sanctioned Hungary and Bulgaria to play without spectators. Photo by fifa.com

FIFA sanctions against Bulgaria and Hungary are unprecedented since this is the first time the governing body has barred fans from attending a match due to discrimination issues, a spokesman has explained.

"For the first time we've got what looks like a relatively strong punishment from the top of football and that could reverberate in the way in which it gives a lead to governing bodies at a national or league level," Football Against Racism Europe (FARE) executive director Piara Powar told CNN.

FIFA punished the Bulgarian national football team for racist behavior of local fans during a home match against Denmark in the World Cup 2014 qualifiers.

FIFA said a group of Hungary fans had displayed offensive symbols and chanted anti-Semitic songs during a friendly with Israel in August while Denmark's Patrick Mtiliga was subject to racist abuse from Bulgaria fans during a match in October.

Hungary will now have no supporters present when they take on Malta on March 22 while Bulgaria will play in am empty stadium against Romania on the same day.

FIFA's move to impose a behind closed doors punishment on Hungary and Bulgaria for their first charges of this nature are significant, according to Piara Powar.

FARE and two other bodies offered evidence to FIFA of wrongdoing in the relevant matches and Powar told CNN he welcomed the steps taken by them.

"Don't forget football is a global game and this is in the end a global problem. We welcome the action they've taken, no doubt about it."

Powar said punishing teams in footballing terms was a much more effective way of tackling the problem of racism rather than imposing financial sanctions.

"This is the only tack to take," he added. "If you fine a national association, however small they are, fines of that ilk are shrugged off they have no impact. You have to resort to other measures in the armory."

Powar said the abuse aired by Hungary fans during their friendly with Israel was "really horrible anti-Semitic stuff" and that he hoped FIFA would continue in a similar fashion if and when future racism incidents occur.

A statement on FIFA's website said that after being informed of the abuse by FARE and two other groups an extensive investigation was launched in which the Hungarian Football Federation "acknowledged and regretted" the behavior of a group of their fans.

"The members of the FIFA Disciplinary Committee were unanimous in condemning an abhorrent episode of racism, anti-Semitism, and of political provocative and aggressive nature perpetrated by supporters of the Hungarian national team," FIFA said.

With regard to Bulgaria FIFA explained: "It was reported by both the referee and the Match Commissioner ...that Denmark's Patrick Mtiliga was subjected to racist abuse by a group of Bulgarian supporters each time he touched the ball after entering the field in the 54th minute.

"In the 73rd minute, the Match Commissioner spoke to the 4th official, and a public address warning was given to the home fans by the announcer. Although the level of abuse subsided, audible racist abuse still continued until the final whistle."