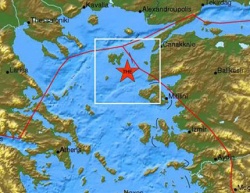 More than 30 aftershocks have been recorded after the 5.8 degree earthquake in the Turkish Aegean Sea Tuesday afternoon.

These aftershocks, of magnitudes around 3.5 degrees on the Richter scale, are bound to continue, according to the Seismology Institute of the Bulgarian Academy of Sciences.

The earthquake, which was also felt in the south-east of neighboring Bulgaria, in Greece, and as far as Serbia, has caused no casualties or damages.

Local media sources report that the tremor was strongly felt in Turkey's north-west and caused some panic among the residents of megapolis Istanbul.

According to the European Mediterranean Seismological Center, which rated the quake at 5.8 degrees on the Richter scale, it occured at a depth of 11 km, 193 km north-west of the city of Izmir.