Hillary Clinton Set to Return to Work at State Department 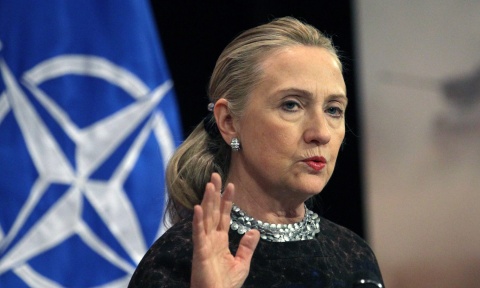 US Secretary of State Hillary Clinton talks to media during a press briefing during a NATO Foreign ministers meeting at the alliance headquarters in Brussels, Belgium, 05 December 2012. Photo by EPA/BGNES

US Secretary of State Hillary Clinton will return to work Monday for the first time since she was sidelined by illness, a concussion and a blood clot, the State Department announced.

According to the department's weekly schedule, Clinton is slated to attend a meeting with assistant secretaries of state at 9:15 a.m. ET Monday.

On Tuesday she'll meet with outgoing Defense Secretary Leon Panetta and National Security Adviser Tom Donilon at the White House before attending meetings with ambassadors at the State Department.

The secretary was released from a New York hospital Wednesday, three days after she was admitted for the treatment of a blood clot in a vein between her skull and brain. Doctors found the clot during a medical test related to a concussion she suffered in December, which she sustained after fainting from dehydration caused by the flu.

Clinton was treated with blood thinners to dissolve the clot, which did not cause a stroke or any neurological damage.

On Friday, department spokeswoman Victoria Nuland described Clinton's condition after her release as "upbeat" and "raring to go" and said Clinton was planning to return to work at the State Department this week.