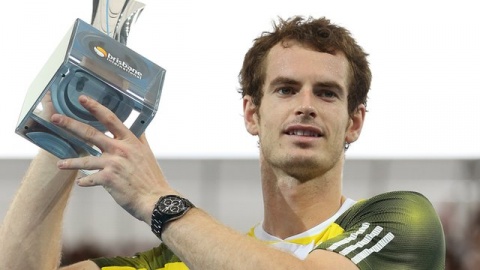 And in an emotional victory speech after his singles triumph in the Brisbane International, Andy Murray said: "I'd like to dedicate this victory to one of my best friends. He's back home watching - you're going to get through it." Photo by BBC

Andy Murray fought off the tears to claim victory in the final of the Brisbane International over Bulgaria's great young star Grigor Dimitrov, following the news that one of his best friends has been diagnosed with a form of cancer.

British tennis player Ross Hutchins, 27, is a former doubles partner of Murray's as well as a Davis Cup teammate.

Murray, who overcame Bulgaria's Grigor Dimitrov 7-6 6-4, dedicated his victory to Hutchins while holding back the tears, saying:

"I'd like to dedicate this victory to one of my best friends. He's back home watching -- you're going to get through it."

Hutchins has been diagnosed with Hodgkin's lymphoma, a cancer of the white blood cell found in the lymphatic system, which is a network of vessels and glands spread throughout the body.

The most common symptom of Hodgkin's lymphoma is a painless swelling in a lymph node, normally in the neck, armpit or groin.

Murray's victory, in which he came from 4-1 down in the opening set, enabled him to claim the 25th ATP title of his career.

The British number praised Dimitrov and said he was impress by the standard of tennis on show.

"I thought the standard of tennis was good today," Murray said told reporters.

"There were a lot of high-quality rallies and I had to change a few things. He started the match off very well and was extremely aggressive.

"I needed to change things around a little bit and I managed to start dictating a lot of points and use my forehand well. So my ground strokes worked well today."