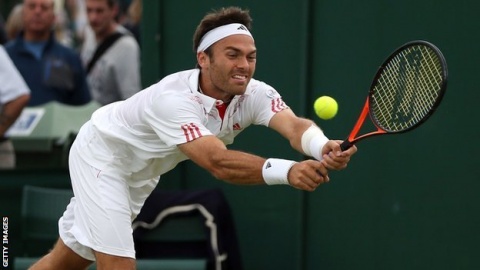 British Davis Cup player Ross Hutchins has been diagnosed with Hodgkin's lymphoma, a form of cancer.

"Unfortunately I will be away from tennis for a while as I was recently diagnosed with Hodgkin's lymphoma," the 27-year-old Londoner tweeted, as cited by BBC.

"I am doing well, very positive with excellent medical support, friends and family around me."

Hutchins and playing partner Colin Fleming are world ranked 28 and 27 respectively in doubles.

The pair won titles at Eastbourne and Delray Beach in 2012 and also teamed up for Team GB at London 2012. They won their first doubles title together in October 2011 and reached the quarter-finals at Wimbledon and the US Open in the same year.

Hutchins, who is receiving treatment at the Royal Marsden specialist cancer centre in London, added: "I look forward to getting over this hurdle and getting back to the ATP Tour and full steam ahead with my tennis career."

Lawn Tennis Association chief executive Roger Draper said: "Everyone in British tennis is behind Ross. He is a true ambassador for the sport, both on an off the court, and I have no doubt he will overcome this setback.

"It's important that we give Ross and his family the privacy they need during this challenging time."

Hutchins is the son of former British Davis Cup captain Paul Hutchins and made his debut in the competition in 2008.

And in an emotional victory speech after his singles triumph in the Brisbane International, Andy Murray said: "I'd like to dedicate this victory to one of my best friends.

"He's back home watching - you're going to get through it."