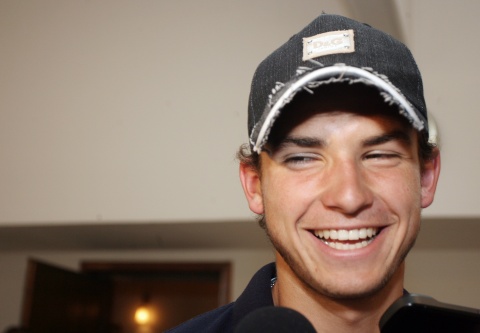 The best male Bulgarian tennis player, Grigor Dimitrov, 21, is the youngest man in the ATP top 50. Photo by BGNES

The best male Bulgarian tennis player, Grigor Dimitrov, has scored a historic victory over Cypriot Marcos Baghdatis in Brisbane, Australia, and qualified for the final.

Bulgarian world number 48 Dimitrov survived a fight back from the former Australian Open finalist and settled the semi-final after a tense final set tiebreak.

The 21-year-old Bulgarian from the southern city of Haskovo is the youngest man in the ATP top 50. At the final, he will meet US Open champion and world number 3 Andy Murray

This will be the first ATP final in Dimitrov's career.

Murray got to the final after Kei Nishikori from Japan withdrew in the second set of their semifinal over a leg injury.

"I must admit, I am very, very happy, particularly because this is the first tournament for 2013. The feeling is marvelous indeed. My coach and I have set the goal to reach a final ASAP in the new year," Dimitrov said after the win.