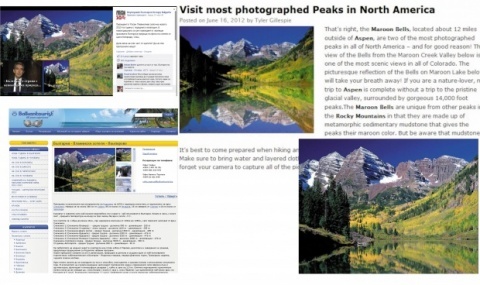 A collage by the Bulgarian news agency BGNES with the picture used in the President's New Year's Eve address.

The photo of the Rocky Mountains in Colorado used in the New Year's address of Bulgarian President Rosen Plevneliev ended up on the website of tourist company Balkantourist as a result of "copy – paste" by a negligent official of the firm.

The photo showing Aspen, US, was used in the televised New Year's address of Plevneliev to illustrate the "unique beauty" of Bulgarian nature.

Neli Sandalska, Executive Director of Balkantourist, told Darik radio Thursday that the employee responsible for the blunder had been dismissed

Sandalska argued that the photo, used to promote Bulgaria's Pamporovo mountain resort on the website of Balkantourist, was not misleading because it was accompanied by other photos which were from the resort.

She went on to say that the website of Balkantourist only had a Bulgarian version and "Bulgarians know all too well where Pamporovo is."

Sandalska emphasized that nobody had asked her for permission to use photos from the company's website for the New Year's speech of President Plevneliev.

She was adamant that all photos on the website of Balkantourist would be checked to avoid new mistakes by employees of the company.

Sandalska admitted that it was an unpleasant situation but suggested that it would not have a negative impact on the image of the country or the President.

Earlier on Thursday, Rumen Draganov, head of the Bulgarian Institute for Analysis and Assessment, criticized Plevneliev for the blunder.

"We cannot advertise our nature with stolen pictures," Draganov told the Bulgarian National Radio, adding that the President's office should have paid royalties for the photos.