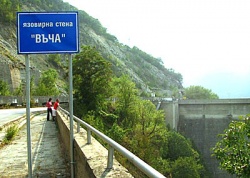 A new mini thermal power plant (TPP) worth over EUR 5 M is to be built on the Vucha River near the village of Kadievo, Plovdiv municipality. Photo by hala.bg

A new mini thermal power plant (TPP) worth over EUR 5 M will be built near the village of Kadievo, Plovdiv municipality, according to Atanas Nedevski, Rodopi Municipality Chief Architect.

The sod-turning ceremony of the TPP project is to take place in January 2013, according to reports of Darik radio.

The TPP project is the largest investment in the southern Bulgarian municipality for the past 12 months.

The investor is ET Nat 2004 and the owner of the facility is Vasil Tanev.

The TPP near Kadievo is to produce 10 million KWh of energy per year.

The project envisages a concrete wall to be built in the riverbed of the Vucha River, where the turbine will be placed.

"This will prevent drought and disturbances of the ecological balance. What is more, groundwater will rise, the wells in the village will be full and the people will have irrigation water," Tasev noted.