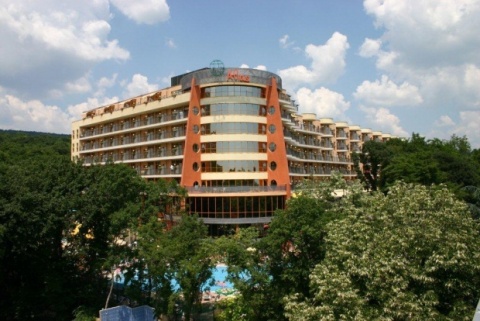 Hotel Atlas in the Bulgarian Black Sea resort of Golden Sands has been acquired by Holding Varna. Photo from medicatours.net

The controversial Holding Varna, which is connected with Varna-based security group TIM, has acquired two hotels formerly owned by Alma Tour, a Bulgarian tour operator that went bankrupt in 2011.

Holding Varna, which is part of Chimimport, a major Bulgarian business operator, has thus became the owner of Hotel Atlas in the Bulgarian Black Sea resort Golden Sands and Hotel Astera Bansko (formerly known as Templar) in the ski resort of Bansko, Dnevnik reported citing an announcement of the Bulgarian Stock Exchange.

Holding Varna has made the acquisitions through its subsidiaries MC Food Varna and Canisto Matti, which paid off Alma Tours debts to UniCredit Bulbank, Central Cooperative Bank, and the Bulgaria Air airline, the last two also known to be connected with TIM.

Alma Tour was declared bankrupt in 2011 at the request of UniCredit Bulbank and Central Cooperative Bank because of failure to pay back its debts, amidst a diplomatic crisis as Bulgaria Air refused to carry out Alma Tour's charter flights and hundreds of Russian and Finnish tourists got stranded at Bulgaria's Black Sea airports.

Secret US diplomatic cables from the US Embassy in Sofia leaked on WikiLeaks have mentioned TIM as one of the major organized crime groups in Bulgaria. None of TIM's activities has been investigated or prosecuted to date.

Holding Varna has been notorious with its plans for resort construction in Varna's Maritime Garden, one of the largest parks in Bulgaria considered a national tourism attraction, which spurred civic protests in Varna, Bulgaria's largest port and Black Sea city.