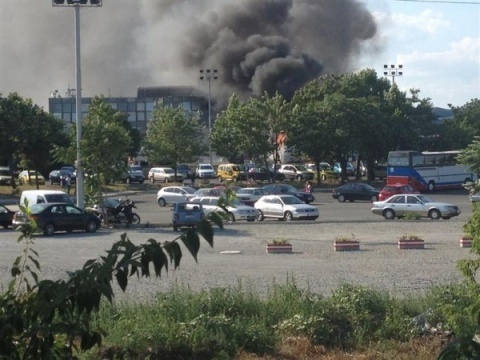 Smoke is seen billowing out of a bus carrying Israeli tourists at Burgas Airport after it exploded on July 18. Photo by BGNES

Bulgarian police authorities have learned the real identity of one of the accomplices of the Burgas bus bomber, according to a local media report.

Police are currently looking for the suspect, whose name is yet to be revealed.

The true identities of Martin and Rico have not been discovered yet. All three suspects used fake driving licences from the US state of Michigan during their stay in Bulgaria, Burgas police official Staneliya Karadzhova has told the 24 Chasa daily.

Karadzhova has also revealed that police believe a fourth suspect may emerge.

In October, Bulgarian Interior Minister Tsvetan Tsvetanov stated that the bomber was assisted by three to five accomplices.

Five Israeli tourists and a Bulgarian bus driver were killed in the July 18 terrorist attack at the airport in the Bulgarian Black Sea city of Burgas. Israel has blamed Hezbollah for the attack.