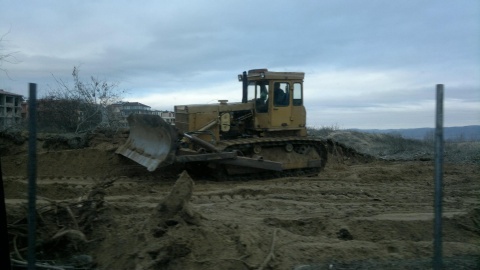 A close friend of Deputy Prime Minister and Interior Minister, Tsvetan Tsvetanov, has been linked to the scandal that flared in Bulgaria just hours before the arrival of the New Year 2013, over reports illegal construction was going on in a protected coastal area.

The owner of the TVB company, Todor Boyadzhiev, who two years ago transferred to Tsvetanov 2 of the 6 scandalous apartments, acquired very quickly by the politician, emerged as a partner with the mangers of the company SLE Group.

The data was discovered by the site for investigative journalism and official WikiLeaks partner for Bulgaria, Bivol.bg.

It was revealed just hours before New Year's Eve that SLE Group has purchased 29 decares of sand dunes near the historical town of Nessebar on the southern Black Sea Coast for BGN 4 M only one day after the same terrain was sold by the Agriculture Ministry to Dimitar Petrov from Plovdiv for a much lower price.

Tsvetanov, himself, said in the middle of the scandal with his six apartments that he was Todor Boyadzhiev's best man and the two were close friends.

The story with the purchase by SLE group emerged Sunday after Bulgarian eco activist, Toma Belev, posted on his Facebook profile an alert that excavators were destroying dunes in the Kokala (The Bone) site, near Nessebar, in a protected area from Natura 2000.

Data from the Trade Registry, checked by Bivol, shows that Boyadzhiev and the SLE Group managers have a joint business "Beach Holiday." It was established recently, in September 2012, with the meager starting capital of BGN 100. Boyadzhiev has 50% of the capital, while Lachezar Bogdanov and Stanimir Stoyanov own 25% each.

SLE Group, "Beach Holiday," and the construction company LS Group, which was caught flattening the sand dunes with excavators, share the same office in Nessebar.

Bogdanov and Stoyanov are managers and not owners of SLE Group, which, according to the site Mediapool, is linked to shady Nessebar businessman, Chavdar Alexandrov. Alexandrov, however, has sent to Mediapool a disclaimer, explaining that the official owner of SLE Group was some Dutch company, represented in Bulgaria by an attorney, who was also his lawyer.

Agriculture Minister, Miroslav Naydenov, at an emergency press conference, stated that the data exposed by Bivol was a fabrication.

The Minister explained the initial appraisal of the land plot has been only BGN 300 000, which was below the tax assessment. The Ministry then had become suspicious and had requested a second appraisal, after which a sales price higher than the tax assessment had been set.

Naydenov is yet to explain if, how and why the buyer, Dimitar Petrov, acquired the terrain for BGN 581 000 and immediately sold it to SLE Group for BGN 4 009 451.

It also remains unclear why after the above transaction, the construction permit has been issued in a record-short time.

A recent check of Mediapool with the Public Procurement Agency has shown that the TVB company, owned by Minister Tsvetanov's close friend – Todor Boyadzhiev, has won public tenders in the amount of BGN 9 M.

According to an October 2010 publication in the anti-government Galeria weekly, 3 legal cases and 4 prosecution orders have been logged against Boyadzhiev on charges of cigarette smuggling. The article further claimed that for many years his cover-up has been Ivan Petrov, former Chief of the police in the southern city of Haskovo and current Member of the Parliament from the ruling Citizens for European Development of Bulgaria party, GERB.

Boyadzhiev is under house arrest in his own SPA hotel near Haskovo.