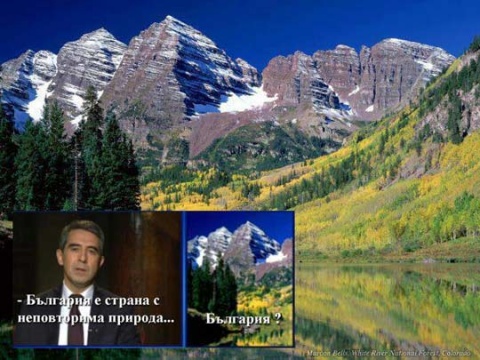 The collage of Lado, showing the now infamous picture of Aspen, CO, US, presented in the President's New Year's address as an example of the beauty of Bulgarian nature. Photo by Facebook

The first ever televised New Year's address of Bulgarian President, Rosen Plevneliev, stirred heated debates in the country with some applauding it and others ridiculing it over a serious blunder.

People who laud Plevneliev say the speech was emotional, touching and very different from those delivered for 10 years in a row by his predecessor and former socialist leader, Georgi Parvanov.

The new elements included the decision to record the address inside the library of the Sofia University, the backdrop with pictures from important for Bulgaria events in 2012, photographs of talented youngsters winning prestigious education awards, of people who risked their lives or perished in helping others, special greetings to Bulgarian expats and soldiers serving in the NATO mission in Afghanistan.

One picture, however, triggered a storm of reactions. In the speech, Plevneliev described Bulgaria as one of the oldest States in Europe, with ancient culture, rich history, and unique nature while the pictures scrolling on the background showed the Tsarevets fortress in the old capital Veliko Tarnovo and right after it – a picturesque mountain landscape with snow-covered peaks and lush meadows.

The ridicule flared after a well-known Bulgarian collage-maker, Vladimir Doychinov AKA Lado, recognized the landscape as being a picture from the Rocky Mountains in the US State of Colorado, and spread it on social networks.

Another interesting detail is the fact the same picture has been published on the official sites of tourist company Balkantourist and of Bulgarica.com as advertisement for one of Bulgaria's top ski resorts – Pamporovo.

Amidst an avalanche of comments, ranging from jokes to outrage, one of the largest Facebook groups "Occupy Bulgaria" asked if the US has been annexed to Bulgaria right before the arrival of 2013.