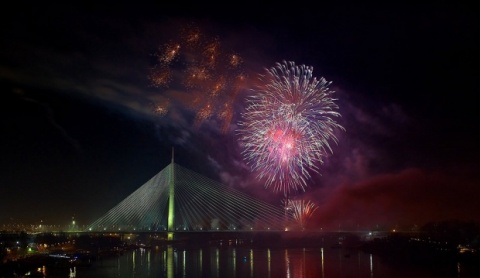 Several thousand people gathered at the square where the City Hall has traditionally organised a rock concert for the New Year celebration. Photo by tob.rs

Seven people were hospitalized after being stabbed with a knife by an unidentified attacker shortly before midnight at the central Belgrade Square of the Republic during the New Year celebration, police said Tuesday.

"We have received a description of the person that stabbed visitors, but the huge crowd at the New Year concert is slowing down the search," Stamenkovic said.

The incident happened in the street near Belgrade's National Theater building.

The police are still looking for the perpetrator, who they believe was "mentally unstable".

Goran Stamenkovi? of the Belgrade police explained that the man "did not go around wielding the knife", but instead stabbed people randomly as be passed by them, "while other revelers didn't even notice".

Three out of the seven were to undergo surgery, Blic daily reported on its web site, quoting medical sources.

Several thousand people gathered at the square where the City Hall has traditionally organised a rock concert for the New Year celebration.