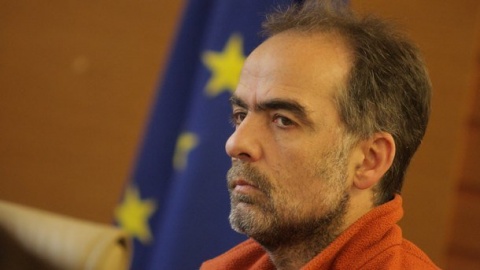 Bulgarian eco activist, Toma Belev, is the former Head of Vitosha Nature Park, replaced after the ruling GERB party took office, amidst suspicions of political and financial interests leading to his ousting from the post. Photo by BGNES

A new scandal has flared in Bulgaria just hours before the arrival of the new year 2013, triggered by reports that illegal construction is going on in a protected coastal area.

Bulgarian eco activist, Toma Belev, quickly made headlines Sunday, after posting on his Facebook profile an alert that excavators were destroying dunes in the Kokala (The Bone) site, near the historical town of Nessebar on the southern Bulgarian Black Sea coast, in a protected area from Natura 2000.

The investigative Bulgarian Wikileaks partner site Bivol.bg quickly followed with a check that revealed that the lot has been sold to a private individual for an excessively low price by the Ministry of Agriculture.

According to Bivol, the site was sold by Agriculture Minister Miroslav Naydenov for BGN 20 per sq.m., much less than the tax assessment of the area, amounting to BGN 50/ sq.m, end of November. The land lot was then quickly re-sold by the private individual for some BGN 140 per sq.m.

Belev insists the State has lost nearly BGN 3.5 M from the unfavorable deal. The new owner of the land is the company "Sle Group," associated with murky Nessebar businessman, Chavdar Alexandrov.

The reports prompted senior officials to react in a hurry in the last day of the year. Minister Naydenov stated that as early as January 2 he will issue an order to establish an ad hoc inquiry committee with experts from several institutions and several NGOs to probe the deal.

"Definitively nothing has been sold, and the amounts that are being thrown in public space are just non-sense. This procedure has started in 2007; this land plot has been approved and included in the detailed urban plan as a territory for construction. In 2008 there was an order to exclude the plot from the forest fund; in 2009 there was an application for a purchase, and the deal has been finalized on November 22, 2011, with an order signed by Deputy Minister Boyanova. The sale's amount is BGN 1 141 849.50," Naydenov said Monday, speaking for the Bulgarian National Radio, BNR.

The Head of the National Construction Control Directorate, DNSK, Milka Gecheva, declared the Sunday check has established that there was no ongoing construction on the said lot, while the decision to stop the cleaning activities at the site has been made by the business in charge of them.

The Ministry of Environment and Waters also firmly denied environmentalists' claims that dunes are being destroyed.

The Director of the Regional Inspectorate for Environment and Waters in the Black Sea city of Burgas, Boycho Georgiev, insisted the location does not include sand dunes. He was backed regarding by the Chief Architect of Nessebar, Valentin Dimov, who, speaking for Nova TV, confirmed the lot did not have dunes.

Boycho Georgiev further added that the location has been urbanized in 2007 and there was an assessment showing the urbanization was not in contradiction with Natura 2000.

bTV reported that a probe of the Burgas Regional Construction Control Directorate had established the existence of a construction permit for the location, which, however, is yet to become effective.

Meanwhile, Toma Belev wrote on Facebook that Naydenov has called him on Borisov's behalf for "some clarifications."

The Minister told the eco activist that the initial appraisal of the land plot has been only BGN 300 000, below the tax assessment. The Ministry then had become suspicious and had requested a second appraisal, after which a sales price, higher than the tax assessment had been set.

Naydenov is yet to explain if, how and why the buyer immediately sold the terrain for BGN 4 009 451. Belev pledged to keep anyone interested in the story informed about new developments.