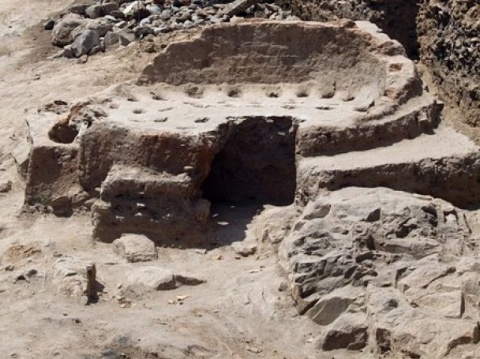 Bulgarian archeologists in the historical coastal town of Sozopol are working on unearthing two antique temples - of Gods Poseidon and Priapus.

The information was announced over the weekend by the Director of the National History Museum and former Minister for Bulgarians abroad, Bozhidar Dimitrov. He added that archaeological excavations were ongoing near the fortress wall where the entrance to the town was uncovered in the summer with well-preserved parts of two towers and the "Saint Nikolay" monastery.

According to Dimitrov, two antique temples were discovered on the left of the monastery, both about 2-meters tall. Inside one there is a stone plate with an image of God Poseidon. The altar of the second temple is well-preserved, and was made by squares of white limestone cemented with iron clamps and lead. There, the archeologists have found a ceramic phallus with Priapus inscribed on it in ancient Greek. Dimitrov says this could be a gift from an individual who might have had some reproductive problems since Priapus is the god of fertility, protector of livestock, fruit plants, gardens and male genitalia.

Digs are also continuing at the north tower, which is located on the highest elevation in Sozopol. When works are completed, the tower will offer a splendid scenery viewed from the sea. Dimitrov predicts it will become one of the symbols of the historical town.