17 Injured in Unrest in Front of Macedonia's Parliament 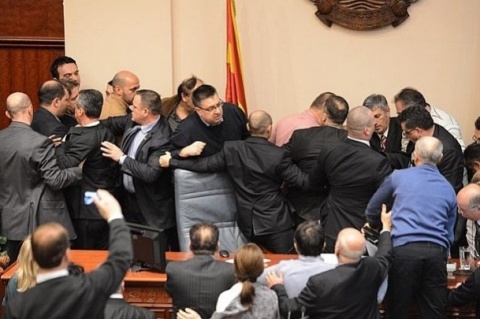 Mayhem in Macedonia's parliament plenary hall at the debate on the 2013 budget. Photo by BGNES

At least 17 persons, including 11 policemen, have been injured during a protest in front of Macedonia's parliament in Skopije that turned violent late Monday evening.

Tensions erupted during the discussions in the chamber of the country's state budget for 2013.

Discussions led to clashes in the plenary hall, after which MPs from the ruling VMRO-DPMNE and DUI coalition went on to adopt the budget on their own.

The opposition had requested at least EUR 208 M spending cuts, and had attempted to block the adoption by filing as many as 1,000 amendment proposals.

"From today on we don't have a constitution, a parliament, a cabinet. We have a dictator regime on one side and the people on the other," said Crvenkovski.

In the meanwhile, supporters of both the Social Democratic Union and VMRO-DPMNE gathered in front of parliament.

Ruling party MPs, including speaker Trajko Veljanovski, had to be escorted away from the buildings, as protesters attacked them.