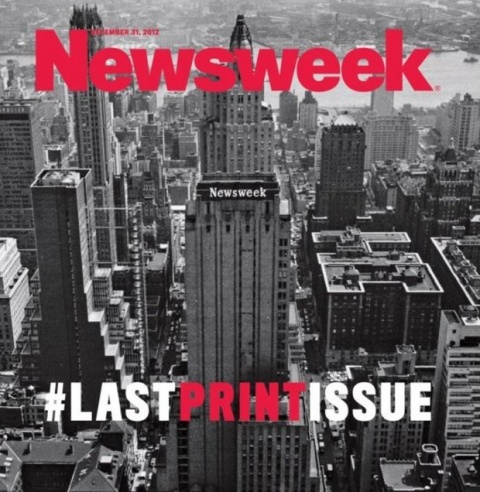 Newsweek, the second largest US news weekly magazine, behind Time, has revealed the image that will grace the cover of its last-ever print edition.

A black and white photo of the publication's Manhattan headquarters takes pride of place, with the strapline #lastprintissue.

The nod to Twitter is regarded as a backhanded compliment.

Amid declining circulation and advertising revenues, the US current affairs magazine was forced to become an online-only publication.

The last print edition will be on 31 December.

Editor Tina Brown described it as "a new chapter" for the magazine.

In a defiant editor's letter, she wrote: "This is not a conventional magazine, or a hidebound place.

"It is in that spirit that we're making our latest, momentous change, embracing a digital medium that all our competitors will one day need to embrace with the same fervor.

"We are ahead of the curve."

Brown became editor of the publication two years ago, after it merged with The Daily Beast, a news website she co-founded in 2008.

Newsweek's first edition was published on 17 February, 1933. It made an immediate splash with its front cover, featuring seven photos - one news story for each day of the week.

Although it always took second place to its rival, Time, it gained prominence in the 1960s for its coverage of the civil rights movement.

At its height, it had a circulation of 3 million, but declining readership and advertising revenue saw it fall into losses.

It was sold by the Washington Post Company to businessman and publisher Sidney Harman for USD 1 in 2010, and was merged with the Daily Beast three months later.

Brown is a former editor of Vanity Fair and The New Yorker. She unveiled Newsweek's final front cover via Twitter, saying: "Bitter sweet! Wish us luck!"

One reader commented that the hashtag headline was "like using your final breath to ID the killer".

The move to a digital edition will allow Newsweek to cut costs such as printing, postage and distribution. However it will lose money from print advertisers, who traditionally pay more than their online counterparts.

As the final edition went to the printers, The Daily Beast confirmed it would be making many of its editorial staff redundant.