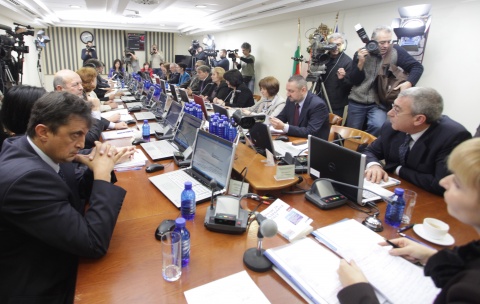 Bulgaria's top juridical body elected on Thursday Sotir Tsatsarov to be the new chief prosecutor in a highly predictable move, which opponents claim was orchestrated by the ruling GERB party. Photo by Sofia Photo Agency

Bulgaria's largest human rights group has quit the civic council with the country's top juridical body in the wake of the controversial election of new chief prosecutor.

"The way Bulgaria's new prosecutor was elected on December 20 proved that the Supreme Judicial Council has no intention to pay attention to the civil society – on the contraty, it is being ignored in the most arrogant manner," the Bulgarian Helsinki Committee (BHC) said in an open letter, circulated to the media.

The letter points out that journalists and human rights NGOs have repeatedly voiced concerns over the professional activities and personal integrity of the selected candidate Sotir Tsatsarov, as well as the selection process which they say has been marred by political interference and insufficient democratic safeguards.

But those calls remained unheeded and to top it all off, Sotir Tsatsarov was the first and only nominee to be put to the vote, the letter says.

Apparently referring to the president, who has to sign the decree for the appointment of the next prosecutor general, BHC urges the risk of discrediting Bulgaria is seriously considered.

"There is the risk of turning the voice of the civil society into a voice in the desert. Should this happen Bulgaria itself will turn into a desert," the letter ends.

The selection process of candidates for prosecutor general has been denounced by civic groups that pointed out key deficiencies and claimed the winner was selected in advance, while the vote was a set up.

Internet forums in Bulgaria are overflowing with strong criticism and angry reactions.

Bulgaria's highest juridical body elected on Thursday Sotir Tsatsarov to be the new chief prosecutor in a highly predictable move, which opponents claim was orchestrated by the ruling GERB party.

Tsatsarov, up to now head of the Plovdiv District Court, won the position at the first round, with 18 votes "for", 3 "against" and 3 abstentions. He will serve a 7-year term.

In a scandalous move, Justice Minister Diana Kovacheva closed the council session before putting to the vote the noninations of Galina Toneva and Borislav Sarafov.

What makes the case even more intriguing is that the nominations of the other two candidates were supported by 5 council members each, most of whom decided at the end to cast a vote for Tsatsarov.

According to the interior minister some of the magistrates abandoned their own nominees because they changed their minds in favor of Tsatsarov during the hearing.

The Supreme Judicial Council (VSS) conducted the vote with an electronic system, which raised serious concerns that it won't be anonymous as votes by each Council member can be tracked.

NGOs however have been pressing for a paper ballot, claiming the vote will be marred by political interference and insufficient democratic safeguards.