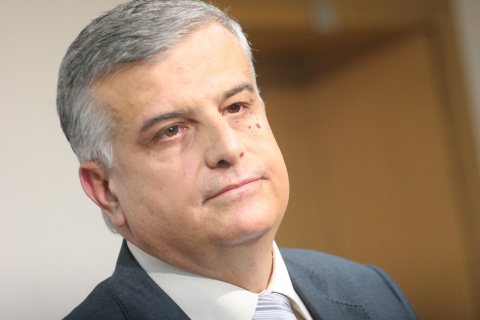 The Bulgarian Energy Holding expects to close 2012 at a profit of BGN 36 M, according to Mihail Andonov, CEO of the company. Photo by BGNES

The Bulgarian Energy Holding (BEH), which brings together all state-owned energy companies, expects to close 2012 at a profit of BGN 36 M, according to Mihail Andonov, CEO of BEH.

The directors of companies within BEH presented annual reports of their activity at a joint press conference on Thursday.

BEH subsidiary Bulgartel, the sole state-owned telecommunications firm, plans to participate in a future tender for a fourth mobile operator in Bulgaria.

The loss of the National Electric Company (NEK) by end-November shrank to BGN 87 M from BGN 142 M in end-June, according to Krum Anastasov, CEO of the company

NEK expects to clear the remaining part of its negative result by the end of the regulatory period for electricity energy in end-June 2013.

In Atanasov's words, the thermal power plants owned by NEK increased their output by 9%, or around 4000 MWh, in 2012.

NEK is also ready to participate in the balancing energy market, according to the CEO of the company.

The coal output of the Maritsa Iztok Mines for 2012 amounts to 29.5 million tones, slightly less than in 2011, but the company expects to boost production to nearly 30 million tones in 2013, according to Teodor Trebov, CEO of the state-owned coal-mining firm.

The Maritsa Iztok 2 Thermal Power Plant expects to close 2012 at a profit of BGN 45 M, according to Boyan Boev, Financial Director of the company.

According to Dimitar Gogov, CEO of statw-owned gas supplier Bulgargaz, 2012 was a tough year for the company due to the market conditions and the increase in crude oil prices.

In Gogov's words, the signing of the new direct gas supply contract with Gazprom Export was a positive development.

Bulgargaz ran up losses of BGN 112 M for the first nine months of 2012, according to the CEO of the state-owned gas supplier.

The Kozloduy Nuclear Power Plant generated 14.280 million MWh of electricity for the first eleven months of 2012, topping the plan for an output of 14.056 MWh for the period, according to Valentin Nikolov, CEO of the company.

The Kozloduy N-plant reported a profit of BGN 154 M by end-November.

In Nikolov's words, a breakdown at unit 6 of the Kozloduy NPP reduced the capacity of unit 6 to 600 MW but the problem would soon be eliminated, allowing the facility to return to its capacity of 1000 MW.

Bulgaria's electricity export fell by 21% due to the economic situation and the climate conditions, according to Ivan Yotov, CEO of the Electricity System Operator (ESO).