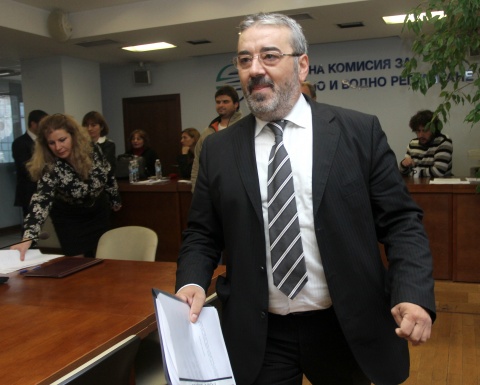 Angel Semerdzhiev, Chair of the State Commission for Energy and Water Regulation (DKEVR), photo by BGNES

Gas prices in Q1, 2013 will drop by 9.8% and heating rates will be fall by 3-7%, according to Angel Semerdzhiev, Chair of the State Commission for Energy and Water Regulation (DKEVR).

Following an open session of the energy watchdog, Semerdzhiev told journalists Thursday that the final prices of central heating would be announced by the end of the day.

The Chair of DKEVR made clear that heating rates in Bulgaria would drop by 3-7%, the biggest decrease expected in Sofia, and the smallest price cuts due in Varna, Burgas, and Plovdiv.

Dimitar Gogov, CEO of state-owned gas supplier Bulgargaz, who attended Thursday's sitting of DKEVR, commented that the company would see its revenues drop by BGN 3.5 M – 4 M in the first quarter of 2013 as a result of DKEVR imposing a gas price reduction of 9.8%, rather than 9.3%, as Bulgargaz had proposed.

Gogov said that Bulgargaz had run up losses amounting to BGN 113 M by October 1.

He voiced hopes that the losses of the state-owned gas supplier would drop below BGN 100 M by the end of the year.

Commenting on the debts of heating utilities to Bulgargaz, Gogov said that the state-owned gas supplier did not see its clients as enemies but they were also not supposed to treat Bulgargaz as a donor.