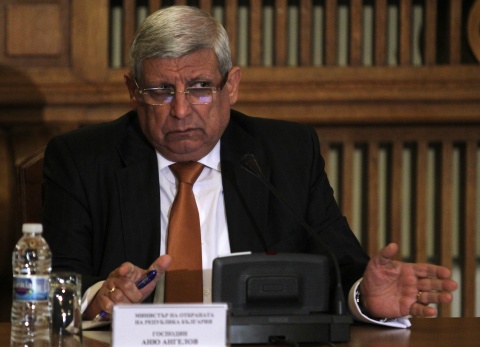 Bulgarian Defense Minister Anyu Angelov has been empowered to handle single-handedly talks with other nations for the purchase of fighter jets for the Bulgarian Air Force. Photo by BGNES

Bulgaria's Cabinet has granted a mandate to Defense Minister Anyu Angelov to negotiate without a tender the purchase of new fighter jets for the Bulgarian Air Force.

What is expected to become Bulgaria's most expensive public procurement deal in the recent years – the purchase of 8 or 9 fighter jets for Bulgarian military – is thus going to be made without a formal tender with potential suppliers providing competitive bids.

"I need to report the results of the talks by March 1, 2013," Defense Minister Anyu Angelov explained after Wednesday's weekly sitting of the Bulgarian Cabinet.

He elaborated that his Ministry will negotiate with potential suppliers of fighter jets from the USA, Germany, Portugal, Italy, Sweden, and Israel, among other nations.

"We're not holding a tender in order to preserve the opportunity to buy second-hand fighter jets. It doesn't matter which government will made the final decision, what matters is that the respective government is informed based on a very thorough analysis," Angelov added.

According to the plans of the Bulgarian Defense Ministry, Bulgaria will probably spend about USD 400 M on the purchase of fighter jets, the deal being subject to the approval of the Parliament, not just the Cabinet, as it is worth more than USD 100 M.

Unofficial information cited in the Bulgarian press says that Bulgaria is likely to buy nine second-hand F-16 fighter jets from Portugal, which are about 30 years old.

Earlier in 2012, the European Commission sent a letter to the governments of

In the past couple of years, Bulgaria's government has made it clear it will most likely choose from among the fighter jets of Swedish company Saab called Gripen, US-made F-16, and Eurofighter Typhoon; this was after in the spring of 2011, the Defense Ministry surveyed USA, France, Germany, and Sweden for their offers. Bulgaria will probably buy 8 fighter jets, with 2015, the indicative delivery date, likely to be pushed back by 1-2 years.

Bulgaria, Romania, and the Czech Republic expressing concern over their potential plans to buy military planes without holding tenders, a move deemed to be in contradiction to the fair competition rules.