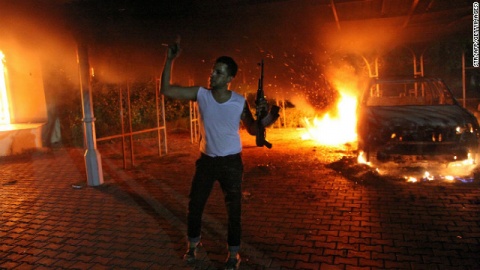 The report said there had been "no immediate, specific" intelligence about the 11 September attack or threats to the consulate. Photo by CNN

Security at the US consulate in the Libyan city of Benghazi was "grossly inadequate" when an attack killed the US ambassador, an official report says.

The report identified the state department's Bureau of Diplomatic Security and Bureau of Near East Affairs for criticism over their apparent lack of cooperation and ensuing confusion with regards to protection.

"Systematic failures and leadership and management deficiencies at senior levels within two bureaus of the State Department resulted in a Special Mission security posture that was inadequate for Benghazi and grossly inadequate to deal with the attack that took place," the panel concluded.

However, the review has not suggested disciplinary action be taken against any individuals.

Despite "a lack of transparency, responsiveness, and leadership" among certain senior state department officials, the report found no "reasonable cause" that any specific individuals had "engaged in misconduct or wilfully ignored" their responsibilities.

It also said there had been "no immediate, specific" intelligence about the 11 September attack or threats to the consulate.

US Secretary of State Hillary Clinton has accepted all 29 recommendations contained in the report.

The 11 September attack saw Ambassador Christopher Stevens, as well as three other US officials, killed.

The ambassador died of smoke inhalation when he was trapped alone in the burning consulate building, after armed men had stormed the compound.

The assault triggered a major political row over who knew what and when. As a result, an independent panel - the Accountability Review Board- was charged with investigating the incident.