Obama: These Tragedies Must End 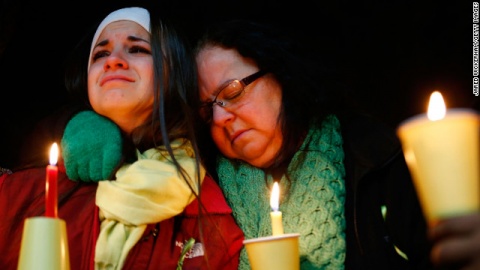 Donna Soto, right, mother of Victoria Soto, the first-grade teacher at Sandy Hook Elementary School who was shot and killed while protecting her students, hugs her daughter Karly while mourning their loss at a candlelight memorial. Photo by CNN

President Barack Obama has said the US must do more to protect its children in the wake of Friday's shootings at a school in Newtown, Connecticut.

Speaking at an inter-faith vigil in Newtown, Obama said he would use the powers of his office to prevent a repeat of the tragedy.

He told residents that the nation shared their grief.

"I come to offer the love and prayers of a nation," Obama said, speaking after religious leaders and the state governor.

"You are not alone in your grief. All across this land of ours we have wept with you."

Obama repeated a call for action against gun crime, saying that in coming weeks he would use "whatever powers" his office held "in an effort aimed at preventing more tragedies like this".

"We can't tolerate this anymore," he said. "These tragedies must end and to end them we must change."

The complex causes of gun crime "can't be an excuse for inaction", he said.

Twenty children and six women died in the assault on Sandy Hook school by a lone man who then took his own life.

The gunman has been identified by police as Adam Lanza, 20.

He shot dead his mother before driving to the school in her car.

Officials say he was armed with hundreds of rounds of ammunition, and used a semi-automatic rifle as his main weapon. He was also carrying two handguns, and a shotgun was recovered from a car.

All 20 children who died in the shootings - eight boys and 12 girls - were aged between six and seven, according to an official list of the dead. The school's head teacher, Dawn Hochsprung, was among those killed.

All victims were shot several times, some of them at close range.

Police say the process of releasing the victims' bodies to their families is under way.