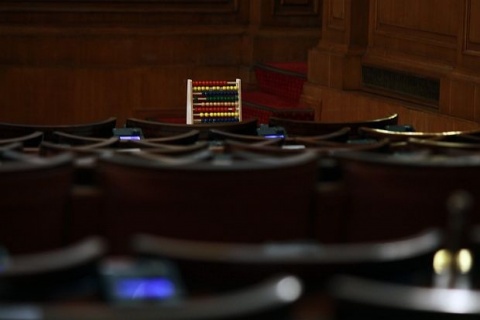 Bulgaria's opposition MPs did not report to work in the Parliament in order to show their opposition to the amendments in the Election Code the ruling GERB is attempting to pass, they say. Photo by Sofia Photo Agency

The Speaker of the Bulgarian Parliament, Tsetska Tsacheva, dismissed Friday all present MPs due to lack of quorum.

The move happened after 3 consecutive checks.

The Members of the Parliament had to continue Friday morning with debates on the controversial amendments to the Election Code, which stirred a number of clashes in the last two days between the ruling Citizens for European Development of Bulgaria party, GERB, and the opposition. The latter accuse GERB of forcing changes to secure their victory at the 2013 general election.

From a total of 240 MPs, only 109 were in plenary hall Friday morning, 98 from GERB and 11 Independent MPs, prompting Tsacheva to call an emergency meeting of the Parliament's leadership after the second count.

After that the bell summoned once again the MPs, but they still did not have quorum. The Speaker then scheduled the next session for December 19.

Deputy Speaker, Ekaterina Mihaylova, and MP Martin Dimitrov, both from the opposition, right-wing Blue Coalition, stated that their formation consciously blocked the registration of their MPs for the session to show they oppose both the amendments and the way they are passed.

All MPs from the opposition, left-wing Bulgarian Socialist Party, BSP, were missing as well. Their leader and leader of the Party of European Socialists, PES, former Prime Minister, Sergey Stanishev, demanded open and clear consultations between all parliamentary groups on the texts in order to guarantee fair election.

The Socialists threaten to otherwise ask President, Rosen Plevneliev, to veto the Election Code and to alert all EU institutions.

"GERB wanted to pass changes in the Election Code by force and in the dark. This way, they tell Bulgarian citizens that they don't care how they will vote because they can twist the results for their advantage. And this is why we cannot make compromises or bargain here. If GERB stays on this path, we will not participate in debates and votes at all," Stanishev said.

The Blue Coalition also wants talks between all parliamentary represented parties in order to reach consensus. They insist on a hearing of the recommendations of the Organization for Security and Cooperation in Europe, OSCE.

MPs from the opposition ethnic Turkish party, Movement for Rights and Freedoms, DPS, were also a no-show.