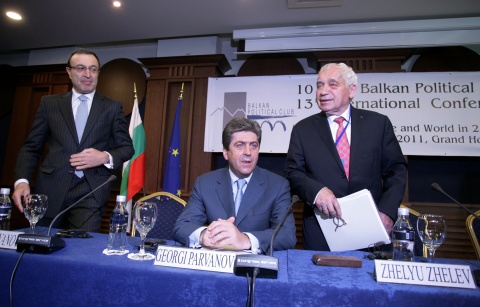 All three democratically elected former presidents of Bulgaria have criticized the country's decision to oppose the EU's setting a start date for accession negotiations with Macedonia.

The decision is expected to be confirmed by the European Council meeting in Brussels Thursday and Friday.

Bulgaria's move was also backed by President Rosen Plevneliev and PM Boyko Borisov, who had long expressed strong concerns regarding the rights of ethnically Bulgarian Macedonians and what they see as a general anti-Bulgarian rhetoric on the part of authorities in Skopje.

The three democratically elected predecessors of Plevneliev - Zhelyu Zhelev, Petar Stoyanov, and Georgi Parvanov - have reacted by expressing disapproval with the move.

What is makes the case even more remarkable is that the three have very different political styles and views, with Zhelev and Stoyanov coming from the rightist Union of Democratic Forces, and Parvanov - from the Bulgarian Socialist Party.

"This move was a mistake. All countries from the Balkans have the same intrests, and those include EU integration," commented Zhelev, who was Bulgaria's President 1992-7.

He was resolute that Bulgaria must both firmly oppose all attempts at falsification of history coming from Macedonia, and firmly support the neighbor's EU bid.

"Bulgaria must make special efforts to defend the rights of ethic Bulgarians in Macedonia. But extreme decisions are never good," commented on his part Stoyanov, Bulgaria's President 1997-2002.

"This move was a mistake - and I'm saying it as one who has consistently led an uncompromising policy towars Skopje," stated Parvanov, who served two terms 2002-12.

"With this decision Bulgarian politicians have punished ordinary Macedonian citizens, and not the handful of scribblers leading the anti-Bulgarian campaign there," added he.

Since Tuesday, Macedonian media have raised a colorful outcry at Bulgaria's block, and some have reported the negative comments of the three presidents.