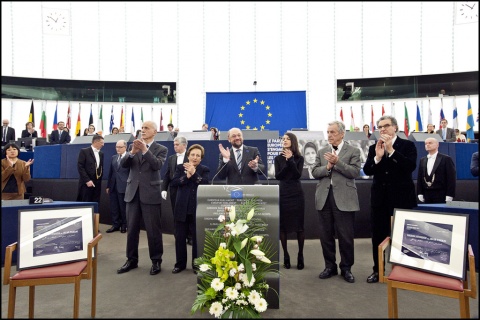 The European Parliament's Sakharov Prize for Freedom of Thought has been collected on behalf of two Iranian activists, lawyer Nasrin Sotoudeh and film director Jafar Panahi.

The laureates were not able to attend the ceremony in person because they are not allowed to leave Iran.

EP president Martin Schulz said during the ceremony: "The situation in Iran is critical. The root of the problems suffered by this proud people is a fanatical regime. There is no accountability in this country: every day, people are imprisoned for saying their opinion. The representatives of the European people considered this to be unfair. The Iranian regime should know that this institution stands on the side of the repressed."

Nasrin Sotoudeh, born in 1963, is an Iranian lawyer and human rights advocate. She has represented opposition activists imprisoned following Iran's disputed June 2009 presidential elections, juveniles facing the death penalty, women and prisoners of conscience. She was arrested in September 2010 on charges of spreading propaganda and conspiring to harm state security and has been held in solitary confinement. She recently started a hunger strike in protest against the state's harassment of her family.

Jafar Panahi, born in 1960, is an Iranian film director, screenwriter and film editor. He first achieved international recognition with his film The White Balloon that won the Cam?ra d'Or at the 1995 Cannes Film Festival. His films often focus on the hardships faced by children, the impoverished and women in Iran.

Panahi was arrested in March 2010 and later sentenced to six years in jail and a 20-year ban on directing any movies or leaving the country. His latest film "This Is Not a Film" was smuggled from Iran to the 2011 Cannes Film Festival on a USB stick hidden inside a cake.

Sotoudeh and Panahi were nominated by the Socialists and Democrats, Liberals and Democrats and Greens/European Free Alliance groups as well as by Jos? Ignacio Salafranca, Elmar Brok and 11 other MEPs.

The prize, named after the late Soviet dissident Andrei Sakharov, is awarded to exceptional individuals who combat intolerance and human rights violations.