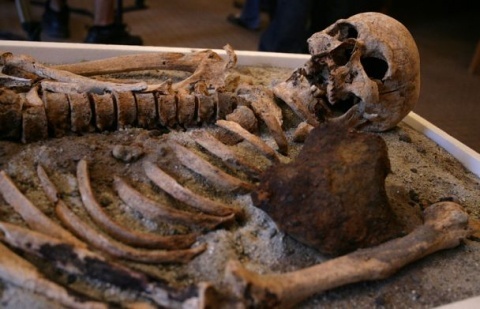 Bulgarian archeologists claim to have found a vampire skeleton in the Black Sea town of Sozopol over the iron stick piercing the chest. Photo by BGNES

The "vampire" skeleton, unearthed during archaeology excavations in the Bulgarian Black Sea town of Sozopol, is included in the National Geographic ranking of the 10 most popular news pictures for 2012.

The news was reported by Darik radio, informing the skeleton has been ranked 10, which according to the editors, shows that the fear of vampires is much older than Bram Stoker's Dracula.

There is no other picture among the top 10 dedicated to archeology, making the Sozopol skeleton the most popular archaeology discovery among the readers of the magazine.

The National Geographic TV channel already aired a film about the "vampire," featuring the historical town of Sozopol for the second time, after a documentary about the relics of St John the Baptist, also discovered there.

Picture number one shows a miniature chameleon, a new specie discovered in Madagascar, which is one of the tiniest reptiles in the world.

The viewers will learn about the discovery and what historians, archaeologists, and anthropologists say about this practice on Bulgarian lands, and the connection between the "vampires" and count Dracula.