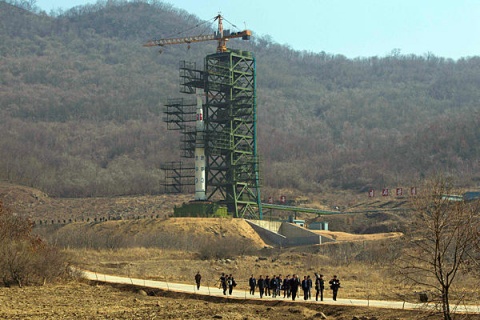 A group of journalists walk down a road in front of North Korea's Unha-3 rocket at Sohae Satellite Station in Tongchang-ri, North Korea, in April. Photo by csmonitor.com

North Korea is said to have started disassembling the long-range rocket it had been preparing to launch between December 10 and December 29.

The rocket is being disassembled over "technical problems," South Korea's Yonhap news agency said on Tuesday.

Satellite photos show workers have begun taking down the three-stage rocket at the Tongchang-ri launch site in the country's northwest, which was due to be launched later this month, the agency has said, as cited by RIA Novosti.

"We detected signs of (North Korea) breaking down the rocket at the Tongchang-ri launch site. It seems that the North is trying to fix technical problems," a senior military source in Seoul has told Yonhap.

It emerged on Monday that North Korea has extended the launch window for its latest rocket test to December 29.

While North Korean authorities have claimed the rocket will attempt to send a satellite into outer space, the international community has condemned what it believes to be the development of an intercontinental ballistic missile (ICBM) program meant to ferry nuclear warheads.