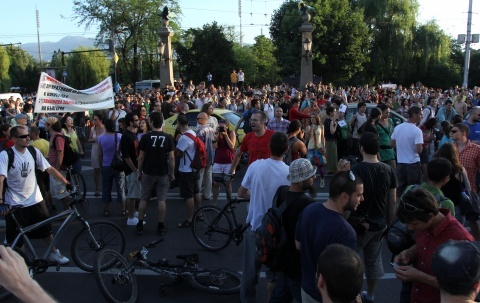 The people who gathered in downtown Sofia to protest a controversial forestry act in June have been collectively named the country's Human of the Year by a Bulgarian human rights NGO.

The Bulgarian Helsinki Committee believes the protesters managed to mobilize themselves against a government that was abusing its power in favor of private interests, thus violating the core principles of representative democracy.

The rallies carried out at Eagles Bridge (Orlov Most) in the Bulgarian capital gathered thousands of people.

Besides the Forestry Act, ralliers, who on three consecutive days June 13-15 managed to block traffic at the central Sofia intersection, have protested what they see as deep flaws in Bulgarian political life.

In particular, they saw the new legislation as intended to service the interests of particular companies in the tourism and lumber industries.

The public pressure led to the Forestry Act's being re-adopted by the Parliament with the controversial amendments scrapped.

A total of 33 people and organizations were nominated for this year's Human of the Year award. The list included journalists, environmental activists, LGBT rights activists and animal welfare organizations, among others.