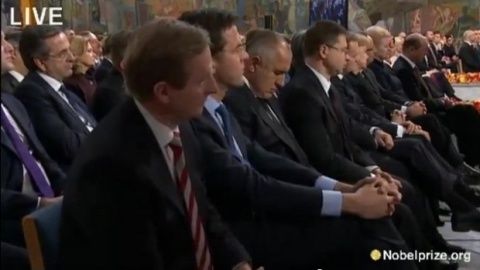 A TV grab shows Bulgarian Prime Minister Boyko Borisov texting during the 2012 Nobel Prize ceremony in Oslo, which is said to have shocked the Dutch PM, Mark Rutte, sitting next to him. Photo by BGNES

Bulgarian Prime Minister Boyko Borisov is reported to have "shocked" his counterpart from the Netherlands, Mark Rutte, by sending SMS Text Messages during the 2012 Nobel Prize Ceremony in Oslo, Norway.

Borisov's SMS Texting was broadcast on the live streaming for the Nobel Prize Ceremony for "a long time", according to the Bulgarian news agency BGNES, especially as he was caught texting during the speech of European Council President Herman Van Rompuy, who received EU's Nobel Peace Prize for 2012.

BGNES comments that during the applause Borisov was burdened by his mobile phone "which he was holding tight in his hand because of the SMS Text Messages that he apparently considered more important."

"Millions of viewers from around the world saw the face of Bulgaria and its telephone," BGNES commented further, adding that according to Bulgarian reporters the Bulgarian PM's texts often read, "How was it?", apparently sent to different people, on different occasions.

In its critical commentary of Borisov, the BGNES news agency remarks that "he should've probably taken advantage of the fact that he was sitting next to Rutte, and say a few words about [the Netherlands' position against Bulgaria's] Schengen entry."