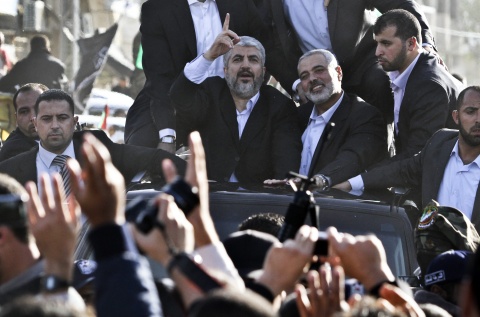 Khaled Meshaal, the political leader of Hamas, has arrived in the Gaza Strip, setting foot on Palestinian soil for the first time in 37 years, regional media reported on Friday.

"I hope God will make me a martyr on the land of Palestine in Gaza," Qatar-based TV channel Al Jazeera quoted Meshaal as saying during his visit to Gaza, shortly after he drove through from Egypt into Gaza via the Rafah crossing.

"This is the first time that I am coming to Palestine in 37 years," Meshaal, who according to Al Jazeera is originally from a village in the West Bank but went into exile after the 1967 Middle East war, said. Meshaal only returned for a brief visit in 1975.

The leader of the Islamist militant movement will spend two days in the Palestinian enclave and is expected to attend a rally on Saturday, advertised as both a commemoration of the 25th anniversary of Hamas' founding and a celebration of "victory" over Israel in the recent days of fighting that resulted in a ceasefire. Hamas has ruled Gaza since 2007.

"This is my third birth," Meshaal told journalists, adding that his second birth was when he escaped Israel's attempt to kill him in Jordan in 1997.