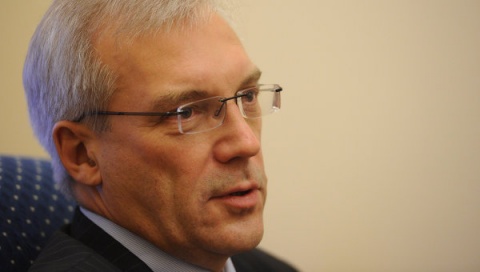 "Sovietization is a clich? which, in my opinion, is absolutely incongruous with the actual processes that are taking place throughout the former USSR," Grushko said during a teleconference broadcast by RIA Novosti.

His comments come a day after Clinton, during a visit to Dublin to participate in a conference with the Organization for Security and Cooperation in Europe (OSCE), warned about what she said was the danger of growing repression among the governments of the former Soviet Union.

Clinton also slammed the Moscow-led Customs Union with Belarus and Kazakhstan, apparently castigating it as a front for reviving the Soviet Union.

"Let's make no mistake about it," she said. "We know what the goal is and we are trying to figure out effective ways to slow down or prevent it."

"Russia takes the position that every government is interested in using all possible resources to cooperate with its neighbors," he said.

RIA Novosti reminds that Moscow has sought to pull together many of the former Soviet republics into what President Vladimir Putin has christened the "Eurasian Union," a political and economic union between Russia, Belarus and several Central Asian countries.