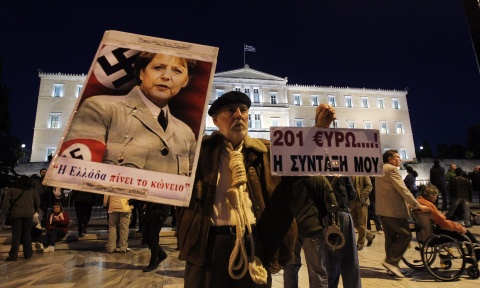 An old man stands in front of the Greek parliament building holding a poster that shows German Chancellor Angela Merkel as a Nazi and a placard that reads “201 Euros is my pension“, Athens, Greece, 11 November 2012. EPA/BGNES

Greece's unemployment rate has risen to a record high of 26% in September, as the country heads to a sixth year of recession, the Greek state statistics agency (ELSTAT) said on Thursday.

The jobless rate rose from 25.3% in the previous month and 18.9% a year earlier, data indicated as cited by DPA.

The Greek unemployment rate has increased dramatically as a result of harsh austerity measures demanded by Greece's international creditors in exchange for rescue loans.