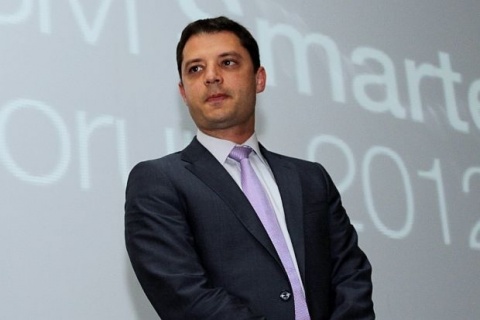 Delyan Dobrev, Minister of Economy, Energy, and Tourism, has presented the benefits of investing in Bulgaria to representatives of over 120 companies at a forum in London. Photo by Sofia Photo Agency

A number of companies voiced plans to invest in Bulgaria after a forum held in London on the benefits of the country as an investment destination.

Delyan Dobrev, Bulgaria's Minister of Economy, Energy, and Tourism, met with potential investors during the forum "Investing in Bulgaria – The strategic business destination in Central and Eastern Europe", according to a media statement of the Ministry of Economy, energy, and Tourism (MIET).

The event was attended by representatives of over 120 companies in the sectors of outsourcing, IT, electronics and electrotechnology, financial services, furniture, and textile.

A large international company in the sphere of port concessions is weighing up the opportunity to participate in the procedure for granting Port Varna under concession, according to the media statement of MIET.

A company which has a logistics center in Bulgaria will expand its presence through the construction of two other centers.

Two companies in the sphere of outsourcing plan to create jobs in Bulgaria, with one of them aiming at up to 3000 new jobs.

Participants in the forum also showed interest in franchise for an apparel retailer.

According to MIET's media statement, importers of wine, furniture, metal products, textile, and clothing for the British market expressed interest in Bulgarian production.

During the forum, foreign investors shared their experience in Bulgaria.

Max Hughes, Managing Director at William Hughes, said that the company had registered a 7-fold increase since 2004 when they set foot on the Bulgarian market.

He added that the investment in Bulgaria had helped increase their overall competitiveness.

Zoya Paunova, Country Manager at AstraZeneca Bulgaria, announced that the company had been registering 30% growth each year after setting foot on the local market.

During the forum, Delyan Dobrev presented the favorable investment climate in Bulgaria.

He emphasized that Bulgaria was the only EU country boasting a credit rating upgrade.

Dobrev went on to argue that Bulgaria was one of the three EU Member States observing the Maastricht stability criteria and ranked second in the EU by debt-to-GDP ratio, at 15%.

Dobrev also gave interviews for the morning broadcasts of CNBS and the Financial Times.