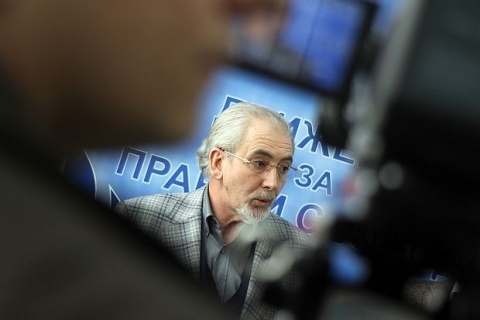 DPS Deputy Chairman, Lyutvi Mestan, is convinced that Bulgaria's scientific community is shaken by an unprecedented scandal. Photo by BGNES

Sixty two Members of the Parliament requested Thursday the establishment of an ad hoc committee to probe tipoffs for illegal activities in Bulgaria's Scientific Research Fund.

"Bulgaria's scientific community has never before been shaken by such serious scandal," said Thursday DPS Deputy Chairman, Lyutvi Mestan at a briefing in the Parliament.

He stressed financing for the Fund has been reduced 4 times – from BN 60 M during the term of the previous Three-Way Coalition Cabinet, which included DPS, to under BGN 15 M in 2012, and demanded explanations on how the winning bidders have been selected.

Mestan stated the ruling Citizens for European Development of Bulgaria party, GERB, has done this selection based on the criteria of closeness to Education Minister, Sergey Ignatov, and obedience to those in power. He asked why Ignatov was hiding the reviews of the projects that won financing.

The MP underscored that Ignatov, the Fund's Executive Board Head, the Cabinet, and Prime Minister, Boyko Borisov, were all responsible for the outrage.

"The scandal is now international, after the publications in the prestigious Nature magazine; the researchers have alerted the EU's top science advisor, and the Bulgarian Parliament should not remain passive in their outcry," DPS MP, Aliosman Imamov added, explaining the case would make it very difficult for Bulgaria to receive European financing for research if there is such program in the next funding period.

One day earlier, President Rosen Plevneliev stated that Ignatov owes explanations to the MPs about the scandal.