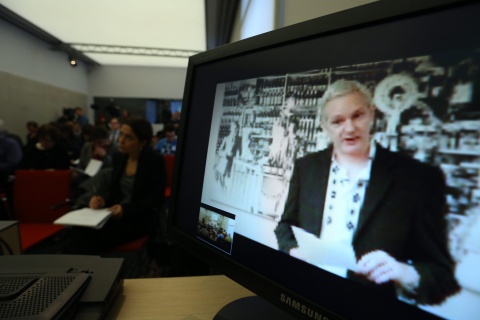 Wikileaks website founder Julian Assange appears on a screen during a video conference. Photo by EPA/BGNES

The founder of WikiLeaks, Julian Assange, has confirmed that the US diplomatic cables about the alleged criminal past of Bulgarian Prime Minister, Boyko Borisov, leaked through the whistle-blowing site, are fully authentic.

Assange spoke via Skype during the European Parliament's seminar focusing on corruption practices in Member States, which was held Wednesday evening. The seminar was organized by MEPs from the Special Committee on Organized Crime, Corruption and Money Laundering (CRIM).

From the Embassy of Ecuador in London, where he is hiding to avoid extradition, Assange stressed the leaked cables can be used as evidence in Court, but people still don't know how they can do it.

The event was the first time ever when words about Borisov's past were spoken inside EP walls. There, Bulgaria was strongly criticized for wide-spread corruption practices. Bulgarian MEPs were also present.

The presentation on Bulgaria was delivered by Bulgarian journalists Atanas Tchobanov and Assen Yordanov, founders of the site for investigative journalism Bivol.bg, which is also the official partner of WikiLeaks for Bulgaria, and by human rights activist, Petar Penchev, from the Association for Free Speech Anna Politkovskaya.

Tchobanov's report was titled "Borisov and the Our Son of a Bitch Doctrine" as an allusion to the supposed remark of US President Franklin D. Roosevelt (FDR) from 1939: "Somoza may be a son of a bitch, but he's our son of a bitch."

"Bulgaria is ruled by mobsters," Tchobanov said, in citing a "Foreign Affairs" publication where Bulgaria was presented as a mafia State for the intertwining of corruption and politics.

The journalist noted that there are witnesses of Borisov's criminal past and evidence such as him being one of the owners in the 90s of the 20th century of a factory for contraband cigarettes. The wiretaps of phone conversations between the PM and the Customs Chief where the first is heard exerting pressure on the second to stop a Customs probe in a brewery were also mentioned.

Tchobanov stressed that in addition to the US cables, several warnings about the current PM's past criminal activities have come from abroad, such as US journalist and top intelligence expert, Jeff Stein's 2007 publication in Congressional Quarterly about Borisov's shady past, or the more recent one in the Berlin-based Tageszeitung, insisting US secret diplomatic cables are based on information from the CIA, and mentioning the cables' reporting on the PM's involvement in criminal activities in the past.

"We submitted all this documentation and information to CRIM, but the hearing failed for political reasons," Tchobanov stated before a very quiet EP audience.

In June, Bivol attempted to attract the attention of CRIM, but on September 24 the MEPs declined holding a hearing on Borisov on grounds they lacked resources to investigate such claims. The Petitions Committee has been informed as well and is yet to make a statement.

Tchobanov further spoke about the report of Transparency International, released on the same day, ranking Bulgaria only behind Greece in the list of the most corrupt EU Member States. He explained that the judicial system of the country is in deplorable state as well.

Giovanni Kessler, Director General of the EU's Anti-Fraud Office OLAF, also focused on Bulgaria, reminding of the notorious and recently flopped for good trial for the draining of millions from SAPARD and the very different outcome in Germany. He gave it as an example of "corruption without boundaries," stressing on the need of a European "answer," such as an EU prosecutor, not just national ones, in such high-profile corruption cases.

From the MEPs, speaking at the forum, only Bulgarian Slavi Binev addressed issues in Bulgaria, backing Kessler's words and declaring Borisov was establishing dictatorship in the country.