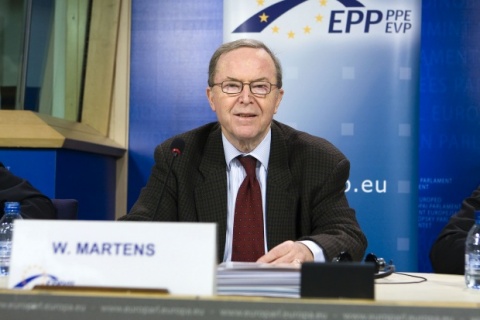 Wilfred Martens, President of the European People's Party, EPP, has issued a statement announcing he was shocked by words of the leader of the Bulgarian and European Socialists, Sergey Stanishev.

Martens reaction was prompted by comments of the leader of the left-wing Bulgarian Socialist Party, BSP, of the Party of European Socialists, PES, and former Prime Minister of Bulgaria, Sergey Stanishev, who said politicians who have lost the trust of the people should leave, and if they refuse to do it peacefully and in a democratic manner, there were "other ways."

Stanishev made the statement recently, at an official press conference on the situation in the country, months ahead of the 2013 general election. He said that during the term of the center-right Citizens for European Development of Bulgaria party, GERB (which is an EPP member) people have lost their jobs, and both they and the business no longer harbor any hope for reforms.

In response, Martens notes he was shocked that the Chairman of the second largest political force in Europe could make such undemocratic statement at a press conference, adding it was unacceptable and contradicted European standards for democracy.

He further stresses he was expecting from the leader of the European political family to correct his mistake.

According to the EPP leader, the Cabinet of Prime Minister, Boyko Borisov, was successful in keeping the macro-economic stability, has implemented effective reforms, and has used wisely the EU financing for Bulgaria.

Martens also underscores that in 2009, GERB and Borisov were elected through an honest and democratic vote after the numerous national and European failures of the government led by Stanishev. He explains the GERB Cabinet has parliamentary majority, and as any democratically elected government can seek again the trust of citizens and a second term in office.