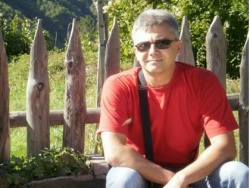 Krasimir Petrov, 49, from Varna, was found dead with a shot in the head. Photo by Cross

Krasimir Petrov, a 49-year-old businessman from the Bulgarian Black Sea city of Varna, has been found shot in the head.

Petrov went missing on November 6, 2012, and was declared wanted by the police. His body was discovered by a local shepherd in a forest area near Varna, the Cross news agency reported.

His death was caused by a gun shot in the head, and according to the initial conclusions of the investigators, the man committed suicide.

No clues of a murder or violent death have been found by the police, the report says. However, the investigators are yet to figure out the exact time of Petrov's death.

After the Varna businessman went missing, there were local reports that he had accrued enormous debts and was unable to pay them back.