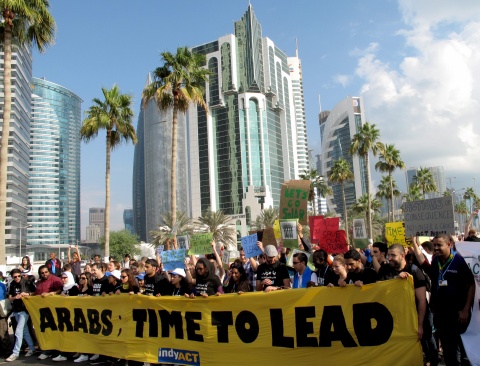 Arab youth hold posters and a banner with the slogan "Arabs, Time To Lead" during a protest rally to demand more commitment to climate protection in Doha, Qatar 01 December 2012. EPA/BGNES

A record amount of of carbon dioxide (CO2) - 35.6 billion tons - will be released into the Earth's atmosphere in 2012, the journal Nature Climate Change reported.

This is 2.2 billion tons more than in the previous record year of 2010, mainly due to increased emissions in India and China.

The report was released as the climate summit in Doha, Qatar, enters its second and final week. More than 17,000 delegates, experts and journalists have gathered in Doha for talks on a second commitment period to the Kyoto Protocol and mechanisms for financing the Green Climate Fund.

Neither the economic crisis nor existing commitments to reduce CO2 emissions prevented a record year, a group of climatologists led by Corinne Le Quere of the Tyndall Center for Climate Change Research in the UK, said the report.

The US remains the developed country with the highest per capita CO2 emissions: 17.2 tons per person compared with 6.6 tons in China and 7.3 tons in the EU.

The results indicate a widening divergence from the trajectory that would make it possible to limit global warming to 2 degrees Celsius, the basic goal of international climate change efforts adopted at the 2009 UN climate change conference in Copenhagen.