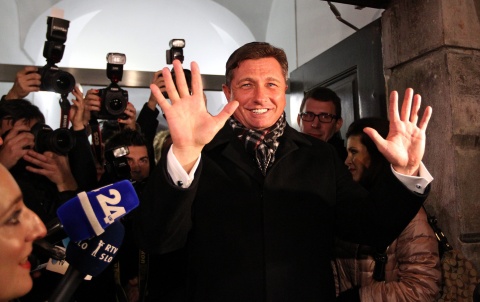 Slovenian Social Democratic leader and former premier, Borut Pahor, reacts outside a polling station after the first results of the presidential run-off were announced in Ljubljana, Slovenia, 02 December 2012. EPA/BGNES

Pahor won 67% of the vote against Turk, who received 33%, according to the State Electoral Commission, after nearly all votes were counted, as cited by international media.

"This victory is only the beginning of a new hope, a new time," Pahor said after exit polls indicated he won.

Slovenians voted on Sunday amid growing discontent with cost-cutting measures designed to avoid an international bailout.

In the first round of voting on November 11, Pahor, who has supported some of the government's budget measures, won almost 40% of the poll ahead of anti-austerity Turk, who garnered 36% of the votes.

Voter turnout in the first round was a record-low at 48% and on Sunday, only 31% of the eligible voters cast their ballots, according to the latest estimate at 15:00 GMT.

Pahor, 49, is backed by the center-left opposition Social Democrats. He appeared to have won voters over by admitting that some of his decisions during his time as prime minister had been wrong. He was ousted after a no-confidence vote in 2011.

Pahor's predicted win comes just days after anti-austerity protests in the capital erupted in clashes that left 15 people injured, triggering fears that the economic crisis could push the nation of two million into instability.

Once seen as a star new member of the European Union, Slovenia is suffering one of the deepest recessions in the eurozone, while problems with its banks have raised alarm that it may need a bailout.

Despite increasing public dissatisfaction with the government's austerity policies - which include public-sector wage reductions and social welfare cuts - Pahor defended the cuts during his campaign.