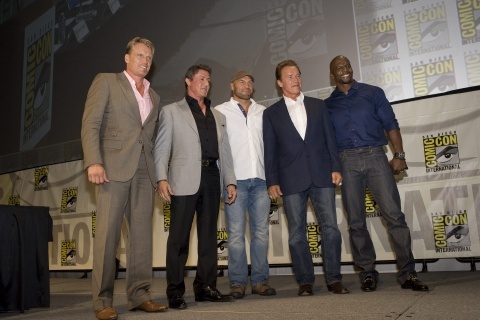 Actors Dolph Lundgren, Sylvester Stallone, Randy Couture, Arnold Schwarzenegger and Terry Crews, pose for pictures after a presentation of the soon to be released movie, The Expendables 2, at Comic-Con 2012 in San Diego, California, USA, 12 June 2012.

A stuntman who was injured on the set of the action movie "Expendables 2" during an October 2011 explosion in Bulgaria is suing for more than USD 25,000, according to a media report.

According to court papers obtained by TheWrap, stuntman Nuo Sun filed his complaint in Los Angeles Superior Court on Thursday against Millennium Films and other entities involved with the production.

His complaint says he was injured while filming a stunt on a rubber boat near the Ognyanovo Dam in Bulgaria, when an explosion occurred.

The incident left him with "severe shock and injury to and upon [his] nervous system, neck, head, body, arms and injuries, all of which may be permanent," the suit says, along with "great mental, physical and nervous pain and suffering."

Claiming negligence and liability, Sun is seeking general damages "in excess of USD 25,000," plus medical expenses past, present and future, compensation for loss of earnings and income, plus the costs of the suit.

The October 2011 explosion also killed another stuntman, 26-year-old Kun Liu. His parents filed suit against the "Expendables 2" filmmakers in July.

Kun Liu, 26, was a native of Beijing and his parents are suing for funeral and burial expenses as well as "the loss of society, love, comfort, attention, services and support" of their son.